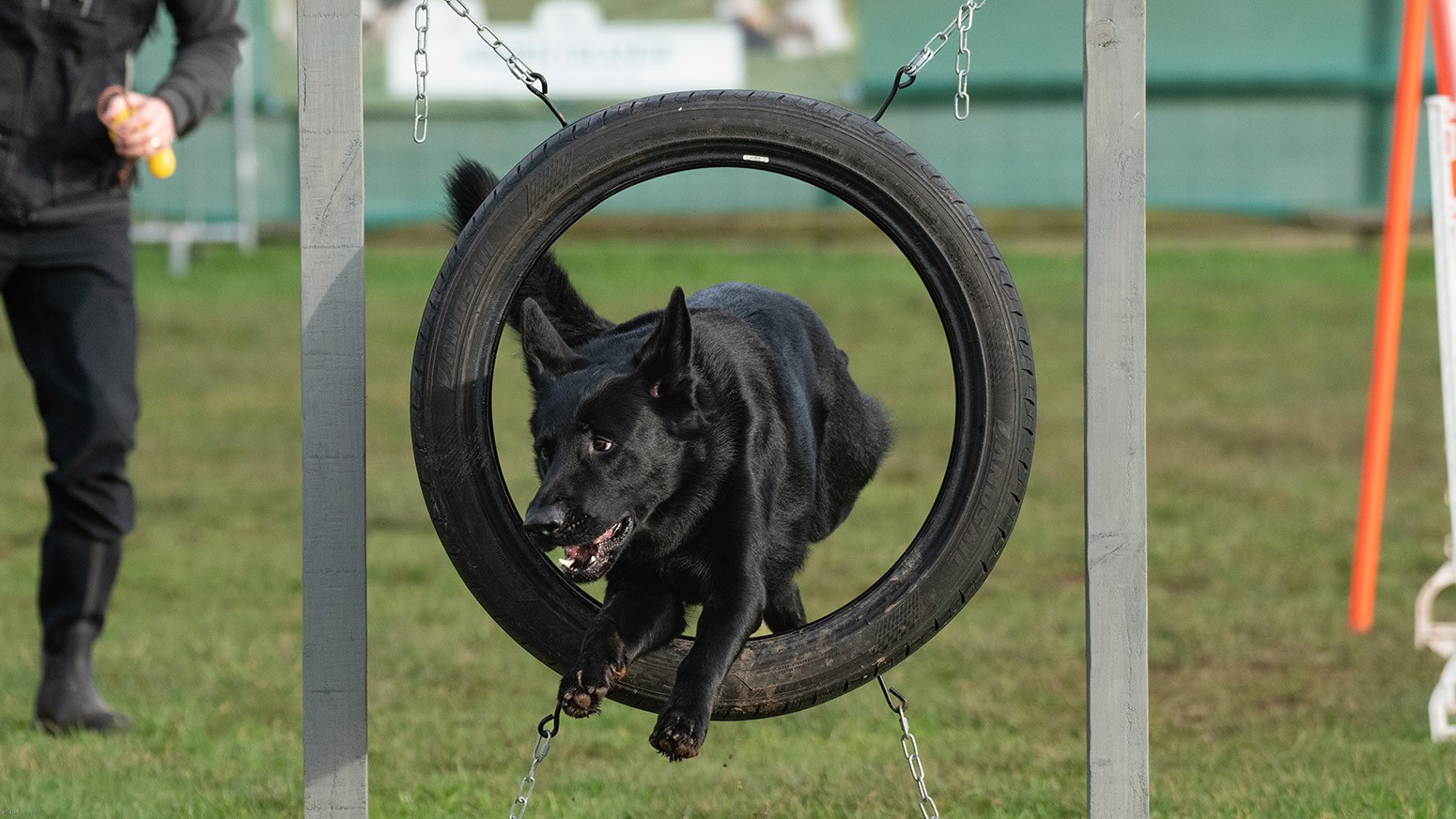 Categories: How to Train

Are you struggling to train your German Shepherd? Or perhaps you are considering owning a GSD and are apprehensive about your ability to handle the dog. Whatever your concern or interest, I am sure this article will provide some insight. If trained correctly, owning a German Shepherd can be an incredibly rewarding experience.

Travis’ result was by far the highest ranking at a World Championship for a British team in 2012. As of writing in 2022, 10 years after their monumental achievement, their record of highest-ranked British competitors still stands strong.

Vislor has helped countless owners improve their relationships with their GSDs. Vislor can help with anything from general obedience to reactivity or even dog sport training. We have hundreds of reviews from happy clients on our website – why not check them out?

Why are German Shepherds the Top Dog?

Its popularity stems from strict regulations for assessing and breeding German Shepherd Dogs by the German Shepherd Association or “Verein für Deutsche Schäferhunde” (SV for short).

Pedigrees are only permitted to dogs who have proven their aesthetic and working traits are sufficiently matched to the official SV breed standard. They must pass tests of health, sociability, workability, endurance and conformation in the show ring before they are allowed to enter a Koerung, which certifies a German Shepherd’s suitability for breeding within the SV.

In short, it is very difficult to demonstrate that a German Shepherd born outside of Germany is “suitable for breeding” by the standards of the breed’s country of origin. Vongalanberg Kai was one of the few British GSDs to attain Koerklasse 1, the highest recommendation from the SV in his time.

The road to achieving Koerklasse 1 required:

When we say Vislor Dog Training are experts in Training, Owning and Breeding German Shepherds, who else in the UK can say they can match our credentials?

Training the Most Famous German Shepherd in the World

Not only has Vongalanberg Kai held the best result for a British Dog at the WUSV World Championships since 2012, but he also produced probably the most well-known German Shepherd dogs of all time, Vislor Antilly or “Brandy” from the hit Netflix Comedy “After Life”, the most watched British Comedy in the World.

Vislor Antilly was also rigorously trained and achieved the highest working qualification IGP 3, SG grading in the show ring and passed the Ausdauerprüfung endurance test before becoming a professional working Stunt Dog in film and TV. You can read more about her film career here, but when it comes to training german shepherds, she really has done it all.

Before you start thinking about teaching your German Shepherd tracking, obedience, protection or tricks and other behaviours needed for film and TV work, you need a solid foundation to build on.

The relationship between you and your dog is the most important thing to you. It is more profound than just teaching a dog tricks; it is about building a strong and mutually rewarding partnership.

Everyone is taught to respect each other and their surroundings from a young age. With dogs, especially German Shepherds, who are bred with strong desires required for working, learning the discipline necessary to live harmoniously/safely in the modern world is essential for everyone’s well-being.

Every time your dog experiences a stimulus, it will react initially on instinct. Whatever you do after your dog reacts to stimuli helps to shape how they will respond to the same stimuli again in the future.

During puppy training, it is important to restrict access to situations where the dog has not yet learned the appropriate behaviour. One key element in restriction can be crate training, where young puppies will more easily learn the correct times and places for toilet training. Crate training can also keep them from unwanted destructive behaviour early on.

Identifying the Type of GSD you Have

There are broadly two types of German Shepherds to be aware of, and depending on what type you have, it should affect how you approach training them. There are:

German Shepherds bred for the Show Ring tend to be big-boned and beautiful, with the more traditional “black and tan” colouring a more laid-back attitude towards work.

Working German Shepherds tend to be more athletic, come in more varieties of coats from all black to light sable and have much more drive to work for food and toy rewards.

At Vislor, we specialise in training Working German Shepherds in IGP Dog Sport. Therefore we get a lot of clients who come to us with problem behaviours and are often struggling with GSDs bred from a working background who have been brought into a pet home with little experience in keeping dogs with such high drives.

Working German Shepherds are much more prone to reactivity to various stimuli, such as other dogs or people, due to their high drive. Being able to spot reactivity and initiating the ‘Following State of Mind’ training sessions early on is your best chance of managing bad behavioural problems in the future.

If you want more information about how Vislor could help you with puppy training, please check out our Puppy Training Advice and Puppy Training Package pages.

With our own German Shepherd puppies, we say that by four months of age, they will have learned loose lead walking, proper recall under distraction, and respect people, property and other dogs.

In our opinion attempting formal obedience training before a dog learns basic manners is like building a house on quicksand. The GSD puppy must learn a strong ‘Following State’ of Mind’ and be a well-behaved pet dog first before going on to teach them more complicated behaviours.

It is also essential to get out there and expose young puppies to a wide variety of situations as soon as they are old enough to get them habituated to everyday life. Habituation involves the mere act of being frequently presented with a triggering stimulus over time to decrease an animal’s innate response to it.

Socialisation is also necessary but often misunderstood. The process by which you should socialise young puppies should be structured around calm and respectful interactions with other dogs and people.

New owners often believe that they must let their puppy meet as many dogs as possible, which can lead to bad behaviour, such as your German Shepherd becoming more excited/reactive when seeing other dogs than well-socialised.

Ideally, it would be best to teach your dog to pass by other dogs like ships in the night and to emphasise having a strong bond with you as their owner through the ‘Following State of Mind’. Interactions with other dogs should happen on your terms with dogs you know and trust.

Suppose you’ve achieved all of the above with a well-mannered, well-socialised German Shepherd and want to do more with it than just be a pet. In that case, you might consider getting into some dog sports. IGP is what we train and compete in, so I’ll go over the basic tips on how to get started.

Drive building simply means taking a dog’s natural desire for food or toys and boosting that desire through short, fun training sessions. Positive reinforcement training around playing for rewards will make your young Shepherd more and more interested in working for them.

You want to aim to get them as excited about your reward as possible before ending the game. Initially, the sessions could be just minutes long. Be aware that you should avoid toys with puppies who are teething, as you can reduce their drive if they hurt themselves tugging while their teeth are still sore.

Something you can get started on very early in a dog’s development is tracking/nose work. Begin with teaching your dog to find food rewards in a square metre of grass that you have trampled and marked by a pole.

Guide the puppy up to the pole, and through holding the lead underneath, allow them to search the square until they find most of the food. Once their drive for the exercise is high and they know to associate the trampled grass with reward, you can start to lay short tracks with food in every footprint until they are confident enough for you to reduce the amount of food on more advanced tracks.

A well-trained, obedient German Shepherd is a beautiful thing to behold. It requires both you and the dog to have established the following state of mind and built the necessary drive for food and toy rewards before trying to teach basic commands.

Hand targeting for food rewards is the foundation for teaching heelwork. Through daily training and drive-building the dog should become conditioned to take the “basic position” on your left hand and move alongside with the nose pressed firmly into the hand, looking for food.

Once established, try to switch to working for a toy under your arm as a target for the dog to follow. This is the bedrock on which any other obedience exercise is built, so getting this behaviour correct is imperative before moving on to retrieves, jumps, send aways etc.

Working with a dog in protection is dangerous if not done in the safety of a registered club with licensed helpers and experienced dog trainers. If you and your dog are not members of a GSDL Working Branch Club you can find one near you here – GSDL Working Dog Group of Great Britain.

Working with a protection dog is not about having a reactive dog that wants to bite anything that moves, but a very controlled exercise that requires a lot of obedience training and proof of sociability through the acquisition of a BH (Traffic Sure Companion Dog Test) qualification beforehand to assure the right temperament and safety of the breed/sport.

When done correctly it is one of the most fun things a well-tempered working German Shepherd and their trainer can do together. One of the first things we teach young dogs is to go to a mark on the floor and bark for a toy until they are given the release command to take it. You can see the beginnings of our method for protection training in the video below.

You can build on the mark work by using it as a basis for extra-curricular mental stimulation through trick training. Once they’ve learned to go to and stay on the mark they can learn various tricks without being so close to the trainer such as playing dead, sitting up, taking a bow, circles etc. through reward-based training.

It helps to get their self-confidence on the right track and can be a fun easy way to teach young puppies positive reinforcement if you do it at home where there are no distractions. Here is an example of my young german shepherd, Penn vom Barbatus, doing her tricks at 8 months old.

German Shepherd Training Near Me

If you are a German Shepherd owner and are looking for a dog trainer near you we have experts all over the country. We will not only help you with problems such as dog aggression, reactivity, barking, loose lead walking, crate training, resource guarding, recall etc., but we can show you what some of the best trained German Shepherds look like through our experienced IGP Working Dogs.

Our dog trainers will always be happy to show you their own dogs working and why GSDs can be one of the best breeds in the world.

Please contact Vislor Dog Training today via the Contact Form, or by calling Lorraine on +447973 320 413. We would be happy to help you get started on the path to success!